Alison is currently enrolled at community college as a theater major. She is passionate about singing, painting, acting, and has performed many times through the Arizona Girls Choir. Alison has been working with young kids for several years through camps and volunteering at the Mesquite Library. She loves to make people laugh and wants to inspire kids just as the Disney Princesses inspired her when she was younger!

Angela is one of our most seasoned performers, acting since she was just 10 years old. She has a degree in theatre from Northern Arizona University, has performed in over 100 productions, and has invaluable experience as a face performer at Disney World.  She loves everything Disney and believes that magic is real! She can't wait to help make your child's birthday extra special!

Anna is a full-time college student studying communications and hopes to one day work in an administrative capacity at a church or non-profit group. She discovered a love for acting in her freshman year of high-school and has enjoyed participating in community theater productions ever since. Anna has helped with the children’s ministry at her church, leading and aiding with Sunday School and other programs there. She is an active member of her church, and in her spare time, she loves to bake and read. She cannot wait to help make your event as magical as it can be!

Originally from Indianapolis, Indiana, Baylee has been living in Arizona for a year now studying theatre at ASU! She has been acting since 13 years old, doing many shows at her local youth theatre. Baylee has even spent a summer studying acting in New York City as a sophomore in HS!  Baylee loves both theatre acting and film acting and is always working on perfecting her craft. She loves working with children and has experience as a babysitter and a camp counselor for a youth theatre acting camp.  Her hobbies include acting, singing, dancing, studying French language/culture, make-up, and baking! Baylee's dream is to one day move to Los Angeles or London to further pursue her dream of acting in film, and hopefully even get behind the camera one day and produce a film. She can't wait to make your special day even more magical!

Ben is a graduate of the University of Southern Maine where he studied Theatre. He recently completed a year long internship at Walt Disney World in Florida where he was able to combine his two passions: Disney and entertaining people! Ben is currently pursuing his career in Theatre and Film, and he is very excited to help make your celebration extra magical!

Brianna is an enthused 20-year-old with a love for theatre, film, and all things acting! She currently studies child psychology in hopes of being an elementary school therapist. Brianna has been doing theatre, film, and modeling for 7 years, and only hopes to continue to live her dream in those fields. When she is not "hanging out" with a princess or superhero, you'll find Brianna slinging some java for Starbucks. 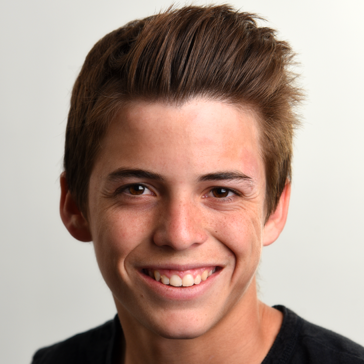 Calvin is a Theater Major at Arizona State University. He has always loved superheroes and would have loved to meet one when he was younger… He is thrilled to make that dream come true for other kids! He loves kids, and has a lot of experience working with them as a camp counselor and a swim and dive instructor. Calvin also loves to act and has been performing since fifth grade in community theater, school plays, and improv troupes, and hopes one day to become a professional actor.

Carolynn is currently attending community college, working on earning her degree in business and marketing. In her free time she loves to act, write, and work on crafts. She uses her hobbies to practice her characters for personal cosplay and for Fair Maidens and Masks making sure everyone gets an authentic experience with the character.

Delaney has been part of youth theater in the valley for over 9 years. She has fulfilled many roles both on and off the stage. Delaney likes to keep herself busy whether it's being a princess, a member of a traveling performance troupe, a competitive cheerleader, or lifeguard at Wet'n'Wild. Like many of the princesses she portrays, Delaney is a wonderful role-model for our youth and the epitome of brains and beauty.  Off stage, she is an honor student at Cactus High School. After graduation she intends to pursue a degree in Science.

Grant has been acting for over a decade and is currently studying theater at Arizona State University. He is intensely passionate about theater, and is well acquainted with working both on the stage and behind the scenes. In the future, he would like to turn acting into a full-time career. When not acting, Grant enjoys writing, video games, and writing video games. He hopes to inspire others to follow their dreams, work hard and have fun while doing it. Grant can't wait to make your child's special day truly epic!

Greggorie has recently moved to the Arizona area after working at Disney World and Disneyland for the last 3 years in various entertainment roles. Additionally, she has a Bachelor’s degree from Dean College in Arts and Entertainment Management. Greggorie has been singing, acting, and dancing practically her entire life. She cannot wait to create happiness and bring the Disney magic to your special day!

Isabel is a sophmore at ASU in the musical theater program.  She has always loved performing and has always loved princesses, so needless to say working for Fair Maidens & Masks is a perfect fit! With her talents of singing, dancing and acting she aspires to one day perform on Broadway! Isabel has a knack for bringing all her characters to life and is sure to make your child's special day truly magical and memorable.

Jennifer loves working with children of all ages.  She is a recent mother, studying to be a grade school teacher, fitness coach and Director of Children's Ministry at her church.  Her hobbies include exercising and traveling.  Jennifer is passionate about helping children and young adults in every aspect of life! She aspires to be a great role-model and to help mold our youth so they can achieve their full potential.

Jessika has many years of acting, singing and modeling around the valley. In fact, she is formerly Miss Asia Arizona.  Jessika's adventurous spirit has led her 6 years living in Dubai and traveling all over the world as an international flight attendant!  Now she's back in her hometown of Phoenix and diving right back into performing, from working on independent and short films to live hosting events and collaborating on web video projects. Jessika's passions include video game and geek culture, sewing and cosplaying. You can often see this creative and talented maiden visiting conventions locally and around the country.

Madison is an exploratory major aiming for a minor in Musical Theatre Performance and a certificate in Actuarial Science at Barrett, the Honors College at ASU. She absolutely fell in love with show choir 14 years ago and has been performing ever since, including 10 years of musical theatre. In Madison’s free time, she is an avid member of a sorority and is a tour guide at ASU. She loves the magic and inspiration of princesses, and she can’t wait to bring that to your child on their big day!

Madison recently graduated from high school with the class of 2020 and could not be happier to begin a new chapter in her life.  She has had the opportunity to participate in seeral plays and musicals and even had a starring role in one of them.  Madison has many hobbies that include singing, baking, watercolor, painting, swimming, makeup application, and photography. She dreams of becoming a world renown Makeup Artist to help women find their confidence. Madison is always planning for the future and cannot wait to see where it takes her.

Maile just graduated high school and is trying to pursue her dream in acting and singing. She dances hula and Tahitian professionally as well as sing on stage for her church. Maile loves babysitting! She tries to get to know each child personally to make sure they have a great time. In the future she hopes to go far in her acting career by performing on the big screen or on Broadway.

Maili is a sweet and cheerful 16 years old who absolutely loves Disney and all things princesses! She also loves to work with children and animals. Her hobbies include singing, dancing, and working with her many reptiles. Her dream is to one day teach others about reptiles and how neat they really are. As a kid, Maili would always dress up as various princesses and now she gets to be "friends" with princesses in real life! She says she is living her dream already and can't wait to make other children's dreams come true with Fair Maidens & Masks!

Ryley is a junior in high school and has a passion for making others happy! She has been performing in musical theatre across the valley for about 8 years now. She loves working with children, whether it’s babysitting or leading children’s worship at her church! Ryley is involved with her school’s National Honors Society, Key Club, and is a Peer Tutor. After high school, she hopes to major in marketing and communications. She cannot wait to bring magic and fun to your special day!

Stephen is an actor, director, and choreographer who recently moved to Phoenix from the Big Apple.  In New York Stephen worked as an after school "manny" as well as a camp-counselor.  When he's not performing Stephen likes to read, paint, and bake.  In the near future Stephen hopes to launch his own theatre-based community outreach program.

Victoria is a freshman at Grand Canyon University and is very excited to be a part of the Fair Maidens & Masks family. She has been involved in musical theatre her whole life, sings on the worship team for her church, and has won national acting and vocal competitions. Aside from performing, Victoria has also been involved in pageantry for over 6 years and currently holds the title of USA National Miss Arizona Teen where she advocates for special education inclusion in schools! She can't wait to make your special event truly magical and memorable.

Does the glass slipper fit? Is the force strong with you? Great! Send us a link to your resume or portfolio to interview for our talent pool.